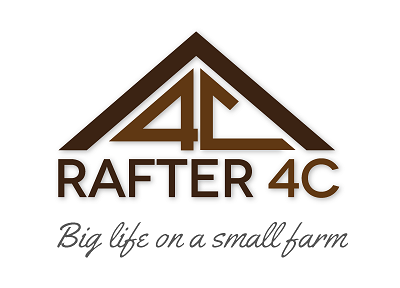 Categories Menu
Home » Around Rafter4C » A look inside our hives.

Posted in Around Rafter4C, Bees and honey, Featured Story | 1 comment

A look inside our hives. 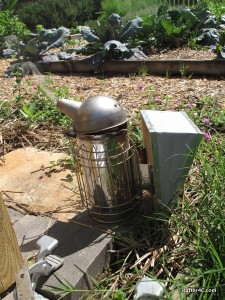 After our total bee loss last year, I was a little deflated.   I felt like an amateur who had no business trying to corral some 50,000 of God’s little insects.  But I so wanted our own bee hives for many reasons:  to pollinate our garden, provide honey, and as a family hobby…something the boys could learn to manage.  It just seemed like a no-brainer for our life here on the farm. But as I began to learn more  about the honeybee, I just knew that beekeeping was for me.  The honeybee is a miraculous little worker.  From its colony hierarchy and order to its vital role in our food chain to its small but incredible little nuances, the honeybee fascinates me.  Totally!

Sure we want the honey and the benefit of pollination of our garden, but more so we want to do my part to help the struggling honeybee.  Their decline is alarming…as it should be.  Some analysts predict without the honey bee we would lose 1/3 of our food supply.  Others agree that our food chain would collapse in 7 years without the bee.  Some will argue those statements, but you can’t deny the honeybee is vital to life as we know it.  So for that, we decided to keep trying.  (On a side note, most bee yards in the U.S. experienced losses last year which made me feel less like a failure.)

In early May, we drove to Jonesboro to pick up two nucs (5 frames of brood, comb, and food stores from an established colony) of Russian honeybees.  This differs from our attempt last year when we purchased Italian bee packages (just bees, no comb or brood or food stores).  With a nuc, there are already eggs and larvae and capped brood.  And the comb has already been drawn out or built…a good head start!  Most importantly, the queen is already laying.  So we just put the nucs into our hives here at Rafter4C and they went straight to work.

After a couple of weeks, we inspected the hives and were happy with what we saw.  Lots of bees!  As newbees, we weren’t sure what we were supposed to see, but Joe and I agreed it was far better than what we had anytime last year.  So we closed the hives feeling confident our colony was growing strong.  We continued to feed them sugar syrup to help them build out the comb on the remaining frames.  A week later I added a second box to give them plenty of space.  I did not want them to swarm.  Bee activity outside the hive has been strong.  It makes me happy.

Today I decided it was time to thoroughly inspect both hives.  I documented it in pictures and will share some of the highlights with you here.

These pics are good representations of the frames in the box. 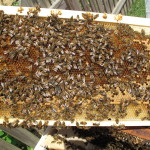 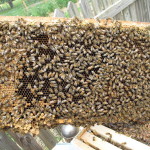 This full frame is from the top (new) box of the first hive.  I am thrilled to see that the queen not only moved up to utilize the additional space we gave her, but also is laying a rather nice and tight pattern.  Notice how she did not lay eggs in some cells that are form a line?  That is where there is wire running through the foundation to provide additional support.  The queen doesn’t like to lay an egg if there is a wire in the bottom.  Smart lady! 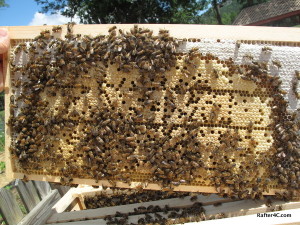 This is from the same box as the previous pic.  Notice the tight pattern of brood again.  The “empty” cells actually have eggs and larvae in them.  I wanted to point out the nice ring of (white) capped honey that arcs across the top.  See all the bees actively working the nectar along the ring edge? 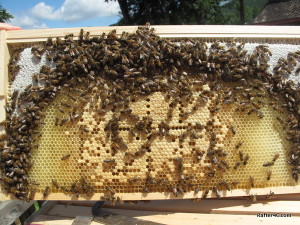 It gets more interesting when you get a close look at what is in the cells.  See the small spec of white at the bottom of the cells?  Those are eggs.

…and the eggs turn into larvae. 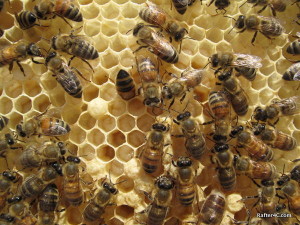 Here you can see honey in the making. 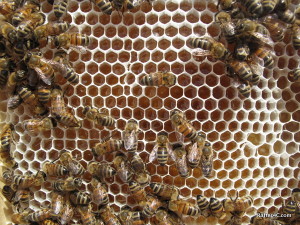 Here you can see the pollen in shades of yellow and orange. 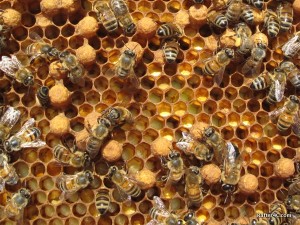 This pic shows capped brood with distinctive large dome-shaped caps.  These cells are Drone (male) bees, which are larger than the worker (female) bees. 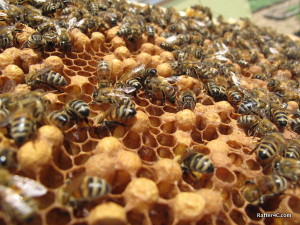 In Hive #2, I found a supersedure cell in the making.  See it right center?  A supersedure cell sometimes signals that the colony is planning to make a new queen for whatever reason.  It could be that she is not laying as well as she should.  It is currently empty.

I think this is the coolest picture of all.  In the center is a Drone bee emerging from his cell and getting his first glimpse of the outside world.  Just to the lower left of him is a Worker bee emerging from her cell.  Notice the Drone’s eyes are much larger and almost touch at the top of his head?  The worker bees eyes are smaller and more on the side of her head.  What a treat that the first thing they saw was me! 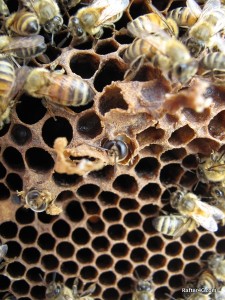 This shot is of two Worker bees working together.  One bee is cleaning the pollen from the hind legs of the other bee.  She will pack that into a cell to be used for food. 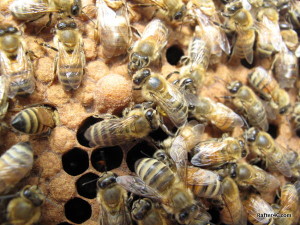 I hoped you enjoyed this look into our hive.  Hopefully, they are on track to preparing for the winter and will come through strong in the Spring and provide us all with abundant honey! 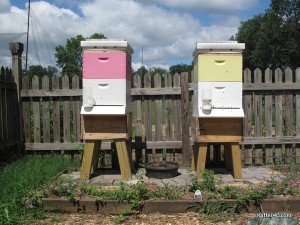 What do ya think? Cancel reply

"…you can't take the country out of the girl."

Well, I am here to tell you that's the God's honest truth! I'm back to my roots and feeling right at home taking care of my family on our small farm here at Rafter4C. Take a look around and see how life is changing for this country-girl gone country club gone country-girl.

Check out our social media pages.